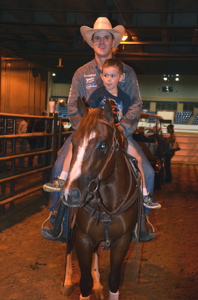 Fort Worth, Texas’ Will Rogers Memorial Center hosted the Southwest Reined Cow Horse Association (SRCHA) Rode to Reno Aug. 14-17, where cow horse competitors came together to compete for top honors in the Futurity and Derby Open and Non-Pro classes.
After the herd and rein work, 49 horse-and rider teams gave it their all in the Futurity Open cow work, and while it was anyone’s game in the beginning, the scores were getting consistently closer as the night went on.Coming out as the 35th draw, Nocona, Texas, trainer Shawn Hays and Red River Rivalry (Soula Jule Star x Shiners Miss Lena x Shining Spark) made an exciting run to mark an impressive score of 150. Paired with their herd and rein work scores of 149 and 146.5, respectively, they earned a composite score of 445.5 to take the Futurity Open Championship and $7,500. The duo topped the herd and rein work as well as the cow work, which earned them an additional $3,816.Purchased as a yearling from breeder Carol Rose, Red River Rivalry has been coming on strong for Hays, and his win in Fort Worth has only upped Hays’ confidence for the 3-year-old’s upcoming performance at the National Reined Cow Horse Association (NRHCA) Snaffle Bit Futurity in Reno, which is set to take place in late September.“He was really good all week,” Hays said of the horse. “I didn’t expect him to be that good. I’m kind of nervous now, because I don’t know what to work on between now and Reno!”The Futurity Open Reserve Championship went to Todd Crawford, of Blanchard, Okla., and No Remedy For Her (Very Smart Remedy x Peptomint Patti x Peptoboonsmal), owned by Russ Mothershead, of Cape Girardeau, Mo. The duo marked a 435.5 total on three (147 herd/144 rein/144.5 cow) to earn the title and a total $5,971 in prize money.
Link to Article on QuarterHorseNews.com
On August 25, 2014   /   News