Congratulations to Erin Russell and Under Lights the 2014 NRCHA Snaffle Bit Futurity Non Pro Limited Champions! Under Lights (CD Lights x Shiners Missy Jay) was purchased by the Russell’s at the 2013 sale! We are proud to have raised this outstanding horse! 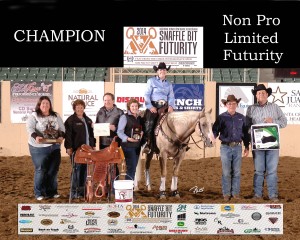 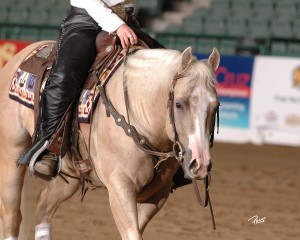 ~ Article as taken from NRHA.com.

“I was first in the herd, so I knew I had the pick of the litter. I had Boyd Rice and Winston Hansma helping me, as well as Todd Crawford and Steve Metcalf. They were awesome help – huge thanks to my guys for helping me,” Russell said.  “My horse was great in the reining – very clean. In the cow work, I was just praying for a great cow. He handled it so well. I pushed him up in there, he took a hold of it, I tried to be easy with my hands and keep my legs close to him and not fall off, and he was great!”

Russell’s Championship came with a pile of great prizes – a Bob’s Custom Saddle sponsored by TKO Ranch, a Gist buckle sponsored by her horse’s sire, CD Lights, a CR Morrison Trophy from the NRCHA, a 30x hat from JW Brooks Custom Hats, a cooler from Classic Equine, a jacket from Cinch, product from Back on Track and Platinum Performance, and a $400 gift certificate for custom chaps from the Chap Lady.

Russell purchased “Buddy” from the Carol Rose dispersal sale last year. She had a feeling about the big, strong yellow gelding.

“I literally think my old horse is inside this one. They’re so much alike. I had a flashback when I was working the cow just then. Buddy really encompasses what Twister was, but without some of the quirks, so he’s even better,” she said.

Russell, who has not yet started showing down the fence, appreciated the new Non Pro Limited Futurity class.

“It’s awesome! I was so thankful for it. It’s another reason I went out tolook for a two year old last year.”