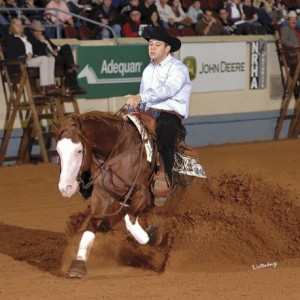 Salgado, who moved to the United States from Brazil at the end of 2012, made a name for himself at the 2011 NRHA Futurity. Showing Brazilian-bred and raised stallion Gunner Boy, Salgado won the championship in the Levels 1 and 2 and captured the Reserve Championship in Level 3.

Eduardo has had continued success in the show pen with earnings of $194,666. “I am very pleased to have such a quality and talented young trainer conducting his business at our ranch,” states Carol Rose, owner of the Gainesville facility.

Salgado will be accepting outside horses for reining training starting February 1. For more information please contact Eduardo Salgado at 940-372-9021.