Carol Rose – Growing Up In The Santa Clara Valley

by  The American Quarter Horse Journal.

GROWING UP IN THE SANTA CLARA VALLEY of California, Carol Ramsey inherited her passion for horses from her mother, Elizabeth. 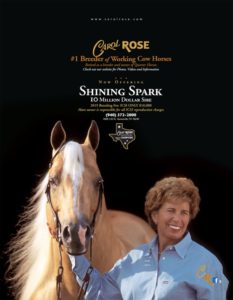 Carol moved to Texas in 1966 and married Matlock Rose in 1968. The couple showed cutters across the country, adding even more accolades to Carol’s growing collection. In 1975, Carol and Matlock stood Peppy San, a 1959 sorrel stallion by Leo San and out of Peppy Belle by Pep Up, on their ranch in Gainesville, Texas. The Hall of Fame stal­lion had combined progeny earnings of more than $3 million. That same year, Elizabeth gave Carol Peponita, a 1969 black stallion by Peppy San and out of Bonita Tivio by Poco Tivio. Peponita earned more than $125,000 in NCHA, and his progeny’s com­bined earnings surpassed $1. 7 million.

By 1976, when a 2-year-old Zan Parr Bar (Par Three-Terry’s Pal by Poco Astro), arrived on the Rose Ranch, Carol and Matlock were well established in the Quarter Horse breeding business. Zan Parr Bar earned three AQHA world championships and a pile of awards, then sired 653 foals that earned nearly 25,000 points in almost every AQHA event. They included an AQHA Superhorse, an NRHA Futurity champion, and 72 reserve and world champions in eight events, as well as 126 high­point award earners in four disciplines and 14 different events.

When Matlock and Carol divorced in June 1984, Carol kept Zan Parr Bar and Genuine Doc, a 1977 sorrel stallion by Doc Bar and out of Gay Bar’s Gen, Carol’s mount when she became the first woman to win NCHA’s non-pro world championship in 1967. Genuine Doc, who was the 1985 senior cutting reserve world champion, produced 874 foals that went on to earn more than $2.3 million in cutting, reining, reined cow horse and other performance events.

In 1986, Carol acquired Diamonds Sparkle, a 1974 palomino mare by Mr Diamond Dude and out of Pollyanna Rose by Clabber Question. This remarkable mare, who joined the American Quarter Horse Hall of Fame in 2007 and the National Reining Horse Association’s Hall in 1996, received her performance Register of Merit during her first year under saddle and her AQHA Champion title the following year, and was the 1979 AQHA Superhorse. Of Diamonds Sparkle’s 18 foals, the 15 performers earned nearly $450,000 and, when they began producing, had a tremendous impact on the breed, led by the palomino stallion Shining Spark.

As a breeder, Carol has bred horses with earnings exceeding $7 million. In addition to Shining Spark and his siblings, she also bred 2008 NRHA Open Futurity champion Shining N Sassy, a 2005 sorrel mare by NRCHA leading sire Shining Spark and out of Sassy O Lena by Doc O’Lena, and two-time world champion A Shiner Named Sioux, a 2006 palomino stallion by Shining Spark out of Docs Sulena by Doc O’Lena whose progeny have already earned more than $275,000 and 450 AQHA performance points.

One of Shining Spark’s daughters, Lil Miss Shiney Chex, one of Carol’s personal favorites among the many great horses she has produced, has racked up more than $115,000 in total earnings, and won multiple world or reserve world championships. To date, her foals have earned nearly 300 AQHA performance points and nearly $400,000 in competition, led by the 2010 red roan Peptoboonsmal stallion Blind Sided ($213,745).

Carol’s breeding program also produced CD Dee Vee Dee, a 2005 sorrel gelding by CD Lights and out of Shiners Missy Jay. Now owned by the McLaughlin family of Commerce, Texas, the gelding has won five youth working cow horse world championships and more than $230,000 in earnings; and Desire Some Freckles, a 1995 sorrel mare by Freckles Playboy and out of Genuine Desire by Genuine Doc, who earned more than $200,000 and whose foals have earned more than $1.3 million in NCHA competition.

Carol is AQHA’s all-time leading breeder of performance horses. She is also a perennial top NRCHA and NRHA breeder, and was inducted into the American Quarter Horse Hall of Fame in 2010.